Book a paid & private walking tour of the Must See in Warsaw.

Distance of the tour

The meeting point is at the main entrance of the 237 m high Palace of Culture and Science. You can recognise the entrance by the large columns and the inscription Palac Kultury.

Pick up at the hotel?

You decide whether the guide should pick you up at the hotel or whether the group should be received at the meeting point.

Important note Please note that the walking time from the hotel to the actual meeting point is included in the tour time.

During our must-see tour, we show the top 3 attractions in Warsaw: the 237 m high Palace of Culture (from the outside) and its surroundings, the Royal Route and the Old Town.

The tour lasts three hours and offers a complete yet very manageable insight into the city. Many aspects are covered. History plays an important role, but it will not dominate or weigh you down.

The three sections together form a whole: the medieval Old Town, the modern Royal Route and the modern city centre with the imposing Palace of Culture.

To make it logistically most convenient for you, we start at the Palace of Culture in the city centre, where there are two metro stations in the immediate vicinity and pretty much all bus and tram lines meet. The tour ends at the most beautiful square in the city, Castle Square. From here you can easily find a bar, pub or a suitable restaurant.

It may sound as if the city tour is too long, that there is too much information; but we can guarantee you: during this tour there is a relaxed atmosphere, we explain everything in a tourist-friendly way and adapt to your wishes and interests. We don’t have a list that we have to tick off in order. The guide has all the freedom and uses it as long as it makes sense for everyone.

Holy Cross Church with the heart of Chopin (from outside); University of Warsaw, Tomb of the Unknown Soldier; Presidential Palace; Adam Mickiewicz monument; St. Anna church (from inside); Castle Square with the Sigismund column in the middle; Warsaw Old Town (view from outside))

This is your tour guide 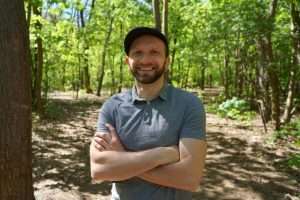 This is your guide 🙂

Antoni is the founder of Free Tour Warsaw by Walking Poland. He was born in Poland in 1984 and grew up in Germany. After studying law in Bielefeld, he moved to Warsaw in 2012. German and Polish are his mother tongues, he speaks English fluently. In 2013, he acquired a city guide licence and founded his own tour company in 2017.

Do you have pre-booking questions?

You are not sure if this tour is the right one for you or you still need clarification? Then write us a message, call us directly or leave your phone number and we will get back to you! Please use the contact form below.

You will receive a full refund if you cancel up to 24 hours before the start of the booked service.
Cancellations can be made
by phone +48 507 980 921 (mob/SMS/WhatsApp)
or
via e-mail to info@freetourwarsaw.com
In case of no-show, the full price will be charged.

No tours match your criteria